Because Amy did it... 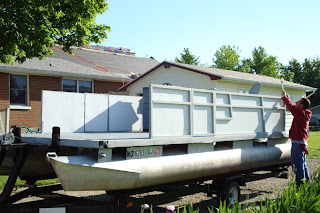 OK, so you're supposed to go to your 6th picture folder and pick the 6th picture and tell a memory about it. Then I'm to tag 5 of you to do the same. So considering that MAYBE five people may read this consider yourself tagged... ditto on the MAYBE... I have no idea who reads this thing besides Amy and Stacy.
This picture is from May 2008. This is our boat after we replaced the carpet, painted the rails and replaced the boards, but before we got seats for it. We fixed it up while the roof was being replaced on the church and the parsonage. The guys replacing the roof on the parsonage put a big hole in the driveway with their equipment. Evidently there's a big empty space underneth part of it. they proceded to fix it by filling it with concrete. It's now ugly. Anyway... that boat has provided us with many headaches and many fun times. It's covered with a tarp right now and hopefully won't cause us nearly as many problems this year. If you look back to some summer posts may-july you could find some stories involving this redneck pontoon. I'm sure there will be more.
Posted by Beth at 8:43 AM 1 comment: 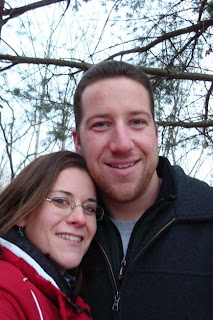 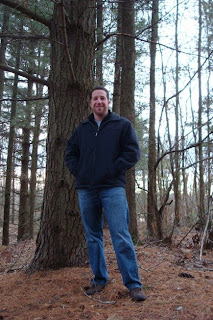 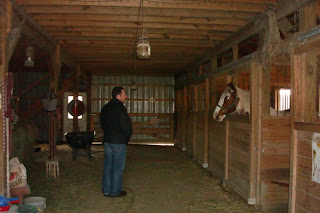 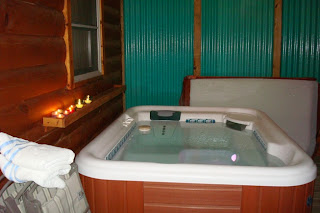 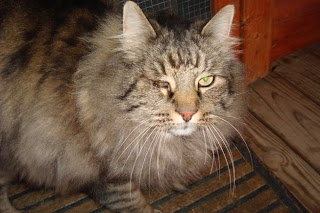 This is the crazy cat that sat outside all day. We called him One Eye. He liked to claw at the screens. 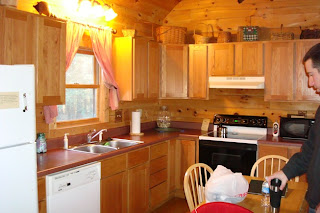 The Kitchen... fully stocked. We brought food with us and cooked most of our meals. 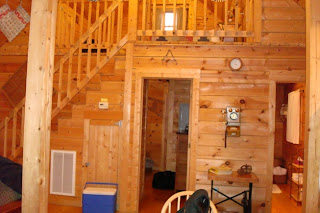 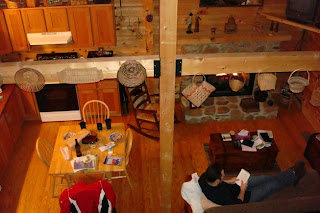 Here is a shot from the loft. There is a really comfy futon that will also sleep 2. 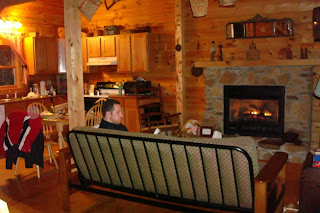 That fireplace was awesome. 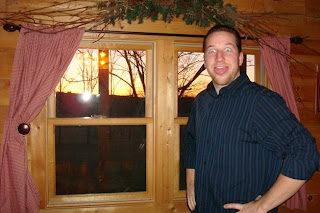 I have no explanation. We had a great view into the valley outside this window.

We have now found our new favorite getaway spot. This week we went to Cabin on the Hill right outside Carbondale. It's about a 3 1/2 to 4 hours from Wapella. James found it while surfing the net. He likes to look for places for little getaways. It is resonably priced, so we decided to use our christmas money and get away for a couple days. We left monday and just got home this afternoon. We pulled into this place and our jaws dropped. It really is on a hill. The owners live on the first hill at the entrance. They you go down hill, drive by the barn, and up the hill to the cabin. We weren't sure our little car would make it up that hill, but it did. :) It doesn't look like it in the pictures, but it's quite a hill, not very big, but steep. James loved the front porch and was a little sad he couldn't sit on it more. It was pretty cold and windy. We loved sitting inside by the fire. We took some books with us to keep us busy. We played Yatzee, read, and hung out in the hot tub. We now know why people love private hot tubs :). We also were able to get fresh farm eggs from the owners. I could tell there was a difference from walmart eggs, but not a big one. It was still fun to have fresh eggs. The looked cool. (for some reason i copied and pasted but it underlined everything and i can't fix it) Anyway. I'll post more pictures of the inside of the cabin in the next post. We stayed in mostly. We ventured out and stopped by one of the many vinyards on the wine trail and then went to dinner with Dave's parents on Tuesday. It's lots of fun. You should all go. 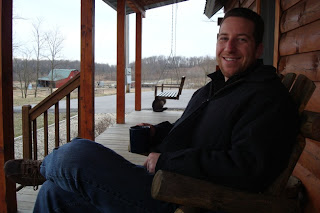 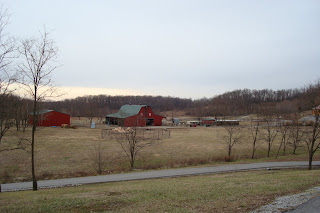 The farm. (part of the view from our cabin.) 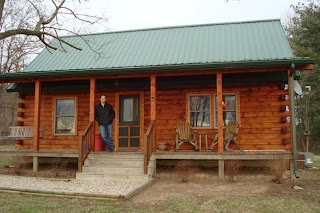 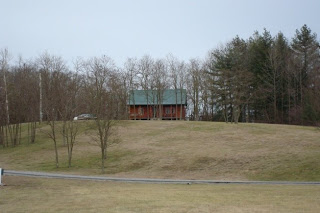 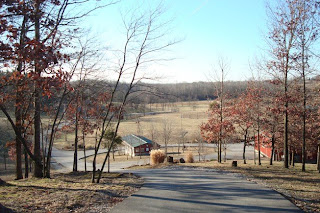 This is the entrance.
Posted by Beth at 2:44 PM No comments:

Well, we got our taxes almost done. It's a relief. Clarence Barney of H&R Block in Lincoln does our taxes. They are so confusing. He trys to explain them, but I only get about 60some% of it. I don't know how much we pay him to do our taxes, but it's worth every penny to have him sign on the dotted line. If we get audited... they take care of everything... I love the peace of mind that provides. What's even more exciting is that we get some back this year even though we pay our own taxes quarterly. In addition to that we saved extra every month in case we had to pay in. So it's like getting a bonus. I think when it's all said and done we'll be able to almost double our emergency fund in the Savings account. I know there are some things coming this year that are going to take us over our monthly budget. So now that our taxes our done. our Savings account is sitting where it needs to be and our budget for the month is done and we can still get grocerys and gas. Yeah!!!

The other cool thing is that we figured out how much we need to pay every month to pay off our student loans in 10 years... we made the first payment toward that goal this month. I'll finish my thesis in the next 3 months, then i'll get a job and every penny of that will go to pay them off earlier.

Yeah for money in the bank and a plan to keep it there... at least for now. Who knows what the future holds in terms of jobs, family and schooling.
Posted by Beth at 6:37 AM 1 comment:

one more week of crazy... then a getaway

This week James has an intensive week from 8-12 monday thru friday. For most of that time my butt will be in the Library workin on the third chapter of five for the thesis that has to be complete by the end of March. On Monday at 1 we go to the tax guy to get our taxes figured out for last year. I've been trying to get together all our numbers for that fun adventure. Tuesday night James has Area Men's. Wednesday afternoon we start Beacon Kidz. Thursday and Friday are still open, but in there somewhere James has to write his sermon and come up with a year long sermon plan for his all day retreat on Saturday.

Monday morning we get to leave for a Cabin on a Hill in Southern Illinois. We are using our Christmas money to rent a Log Cabin for two nights. It will be a nice get-a-way. Yesterday was the first day since I dont't know when that we stayed home and did almost nothing. We're both looking foward to it. But for right now... i've got to get the parsonage and supper ready for the youth group to come over tonight. ...maybe i'll take a nap first.
Posted by Beth at 10:58 AM No comments:

You Know You're a Preacher's Wife When...

Here's a fun list I found posted on another Preacher's Wife blog. It's really quite accrate.

You know you’re a pastor’s wife when…

1. ...you are rarely referred to by your given name. You are most often “The Pastor’s Wife” or a variation on that theme (”Pastor ______’s Wife,” “Married to the Pastor,” etc.). You may even be called “The First Lady” Yeah... I noticed that I sort of lost my own identity when we began this gig as Preacher and Preacher's Wife... it took some getting used to. This mostly happens when I get introduced to people.

2. You know you’re a pastor’s wife when… people act weird around you. (this is her story... I was once in a conversation with a group of adults when one woman said, “Yeah, I haven’t been to church in a while.” As soon as she said it, she looked at me with an “I’ve been caught” look and then she said, “Oops…busted.” For the record, I don’t take attendance. I am not a babysitter. And my general feeling is that adults can and should make their own decision about if and when they attend church. Heck, it takes all my energy to make sure I make it to church let alone the rest of the population.) I agree with her conclusion to the matter. I've not been at it long enough for too many people to act wierd around me... but they do act different around both of us. I don't get why people think we're supposed to be soooo much holier than they are.

4. You know you’re a pastor’s wife when…you wish you had a dime for every time someone claims your husband said something that he never said. If you did, you would be a very, very rich woman. And if you had another dime for every time what he supposedly said was ABSOLUTELY OUTRAGEOUS and UTTERLY STUPID, you’d double your money.

5. You know you’re a pastor’s wife when…”rich” (monetarily speaking) is not in your vocabulary. Never has been. Never will.

6. You know you’re a pastor’s wife when…you’re either extremely uncomfortable or extremely gleeful (depending on your personality) when you’re in a conversation with someone who uses lots of four-letter words and then asks you the question, “So, what does your husband do?” Gotta love it when this happens.

7. You know you're a pastor's wife when... you're sitting around the dinner table with a room full of capable people and your husband is asked to pray because he's a "professional". Come on people... there's no such thing as a professional prayer.

Isn't that a fun list. I changed a few words but my added comments are in blue. 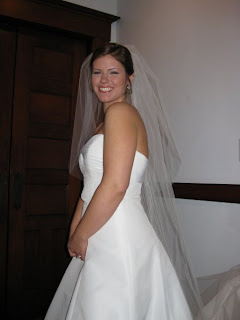 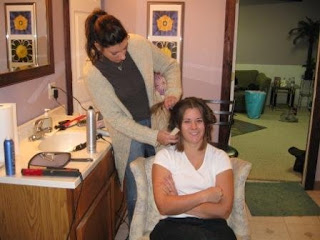 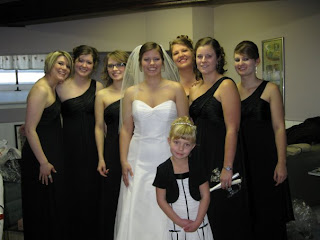 What a week we have had. In case you don't know my sister got married last night. We had a great time. Everything went well even though we were dealing with the most unprofessional wedding coordinators at the venue. Anyway. The fun of planning for this wedding has been happening for a while now, but the rubber hit the road on Saturday. During the crazy weather we went to Distinctive Affairs (the venue from @#!*) to scope out the scenery, made our lists, and hit the stores to find the rest of the decor. It seems like we bought every roll of black satin ribbon and turquoise ribbon in Bloomington. Here's a great picture of Saturday nights party favor party. 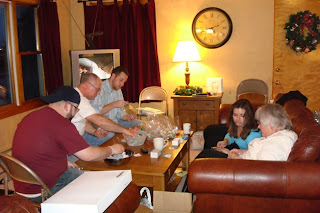 On Sunday we had James family and my family over for dinner. We fit 16 people in our home for lunch. It was a lot of fun. 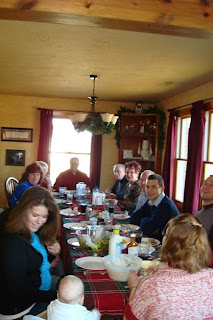 Monday and Tuesday were filled with more errands, lots of decorating, more biscotti making, manicures, more decorating, a rehearsal and the Bachelorette Party. Mom and Dad even practiced their dance moves. 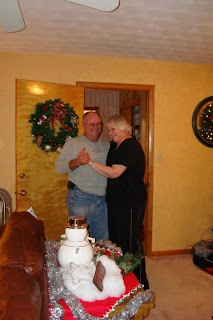 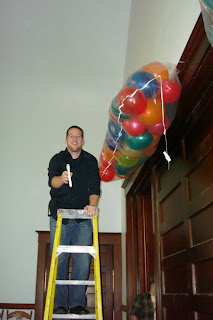 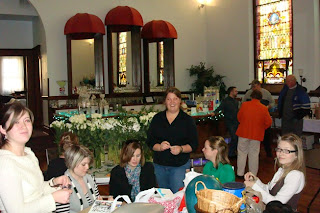 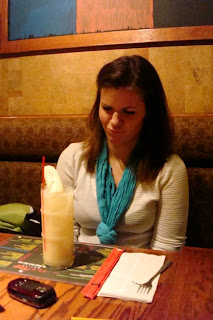 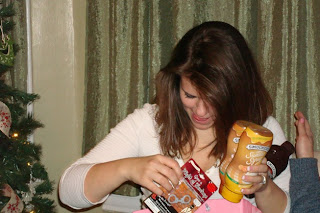 Wednesday was a lot of fun. We got up and were at the place by 9am to get started on our hair. We also finished the decorating and the flowers. By 3 we were doing pictures. By 5 we were waiting around. By 7 we were on the move. It was a lot of fun. I don't have pictures now, but I'll post some when we get them. We packed the place. There had to be 200 people at this wedding. We had dancing, a coffee bar, hot finger foods, a cheesecake bar, and party poppers, noise makers, and balloons to drop from the ceiling at midnight. We had enough to serve an army. I know have frozen cheesecake, cheese puffs, biscotti galore. My parents are even going to start a coffee bar at church with all the leftovers. We got home about and in bed at 3 this morning. For some reason I woke up at 7:30. Go figure. Oh well, Dave and Joanna should now be on a plane headed for Texas. Everything and everyone were beautiful. We had a great time. We have a great family.
Posted by Beth at 6:39 AM 1 comment: